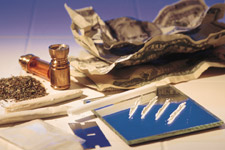 The kinds of drug charges facing our clients are usually the ones involving illegal drugs, including narcotics, crack cocaine, heroin, cocaine, marijuana, methamphetamines, prescriptions drugs such as OxyContin and Vicodin, and Ecstasy. There are many kinds of drug offenses. A person can be charged with selling drugs, growing drugs, simple drug possession, drug trafficking, or manufacturing a controlled substance.

The Law Offices of David M. Boertje defends people charged with drug-related crimes that can include:

You don't even need to sell drugs to be charged with selling drugs or drug possession. Certain police officers have been known to allege the sale of drugs just because there is a large amount of drugs involved and/or the drugs that are found are packaged separately. Remember, however, just because you are arrested for a crime doesn't mean that your guilt can be proven or that you are even guilty. There are defenses that a good criminal defense attorney can come up with. Search and seizure issues might even be a factor in determining your guilt or lack thereof.

The number and kinds of illegal drugs involved can determine the seriousness of the charges. Another issue to consider is whether the drugs were for sale or intended for personal use. Depending on the evidence found by police, a drug offense might be a misdemeanor or a felony.

Arresting someone over a few ounces of an illegal substance is less serious than someone caught trafficking a few pounds. Whether or not a person has a prior criminal record is also an important factor. A person with a previous record may end up with a severer punishment than someone who is a first-time offender or someone with a very minor criminal record.

Penalties for a drug crime conviction can be serious and can include fines, jail time, prison time, revocation of one's driver's license, the seizure of assets, probation, drug treatment, and having to register as a narcotics offender. This is why you must hire an experienced criminal defense lawyer right away.

The Law Offices of David M. Boertje has successfully represented defendants charged with committing a drug crime. We might be able to get the charges or penalties dismissed or reduced.

Contact the Law Offices of David M. Boertje and Talk to an Attorney Right Away

To speak directly with a skilled criminal lawyer, or if you have questions related to your drug case that need to be answered, contact our offices for your FREE CONSULTATION. You can also reach us by completing the form on our Contact Us page or by writing an e-mail. We will return your call as soon as we can.